What better way to spend the Bank Holiday afternoon than razzing around Mallory Park race circuit with the kids?

The attraction of traffic free cycling for my girls and their cousins was too good to miss, so we loaded up the bikes and headed off to a special family session put on by Cycling Mallory.  The girls travelled by car while myself and my newly converted brother -in-law took a scenic route on our bikes through a blustery Leicestershire countryside. 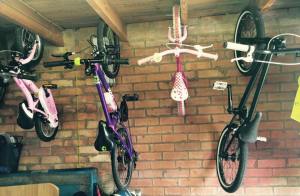 Some of the family bikes

As always, the smooth circuit is a real treat to cycle on, and with the guidance of “going steady” we rolled down the hill towards the start and finish straight.  My eldest has just mastered how to change gear while moving on her outstanding Frog bike and it was great to see how exhilarating she found the high speed descent (we forgot about “going steady”).

Just as predictable as the smooth circuit is the wind as you turn around Gerards Bend.  As we turned in to the wind, my nephew asked how there can be another Gerard because there is “only one Steven Gerrard” but soon finished with the questions when he was puffing and panting in to the wind.  Both the 7 year olds found it a slog around the bend but soon picked up each time we hit Stebbe Straight. 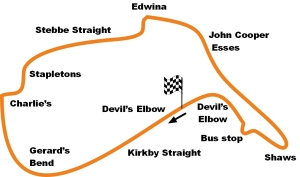 The first time round we cut out the hill going up to Shaws hairpin bend, making the circuit in to an oval shape.  Pretty quickly we caught up my wife and my youngest who were on their first lap and chatting away about the things they could see on the lake in the middle of the track.  The downhill start had been a bit intimidating for my 4 year old who has been cycling her bike for a couple of months so they’d walked down before starting.  But the thought of bombing down the hill again was too good to resist so the older cousins both headed up to the hairpin at the end of their next lap so that they could race down from the Bus Stop to Devils Corner and along the Kirkby Straight.

All in all, the older ones did 5 or 6 laps each, my youngest did a couple of laps and her other cousin who is 5 did 3 or 4 laps at a good pace.  Plenty of families turned up with budding young Froomes and Contadors, whilst others were there to enjoy a safe environment for their kids to ride until their legs ached.

We certainly got our monies worth around the 1.2 mile track – it was £5 per adult and one child – and all our little ones (and some of the big ones) could feel that satisfying ache in their legs as we loaded the bikes in to the cars and headed home for pulled pork cobs!

(P.S. I happened to get a 3rd place in the KOM along Burbage Common Road on the way home so I was well happy too)

It’s been nearly 3 months since I rode my bike outside.

The last ride I did was up to our hotel in Cerbere after crossing the Pyrenees in 99 hours and since then life has been about other things. Spending weekends with the family, doing some running (and injuring myself in the process), cheering on my eldest in her monthly cross-country endeavours, drinking too much and eating badly. The inner confidence I gained from the RAID has all gone and the sentiment of “There’s nothing I can’t do now” has somewhat dissipated and been replaced with “I’m doing nothing now”.

So after 3 short turbo sessions the prospect of doing the Evans Ride It! sportive from Mallory Park on Sunday felt rather daunting. Dragging myself out of bed before the crack of dawn was painful. Finding all my autumn/winter cycling kit had been a challenge and squeezing in to the Lycra again was slightly disconcerting. But it all started to come back to me when I left the house at 7:20 with my lights on to roll through the village to meet my mate Dave.

Ok it was colder and foggier than when I last rode my bike. I’m a fair few pounds heavier and sporting a winter beard but you can’t replace the feeling of rolling on a bike, flicking through the gears and feeling the rush of the breeze over your face as you pick up speed.

The event itself was well managed. We arrived early, signed in first and set off in the first group. By the time we started there was a long old queue for registration but that looked like the only hiccup of the whole event. And you can’t complain too much about that because we all got a free Hi-5 race pack for signing in.

We started off with a lap of the familiar Mallory Park race circuit before heading out to the equally familiar Leicestershire countryside. The weather had been kind to us and the fog lifted early to reveal clear blue skies. Pretty soon we were following the well signed route and warming up nicely.

Dave and I lost our mate Terry after about 20k. He’s done a lot more cycling since the Pyrenees trip and had good legs. I’d already opted to play it safe and cycle with 68 year old Dave so we were pootling along at a steady 14-15 mph when we passed the split for the short route.

With route options of Fun/30/50/70 miles there was plenty for people of all abilities and whilst the roads offered a few leg warming lumps, there was nothing too hard until we reached the short and steep rise of Orton-on-the-Hill. Even that nasty little kicker was done pretty quickly.

As you’d expect from Evans, there was a well equipped little feed stop after about 30 miles where the cake was moist and the water was chilled.

The 50 mile route we selected took in some of the classic Leicestershire sights on quiet country lanes which proved a perfect reintroduction to the bike for me. Soon after we passed Market Bosworth we were joined by one of Daves old cycling buddies so, as they caught up on old times, I decided to clear out the pipes and give it a good blast for the last 6-7 miles.

It was invigorating to know that the ride was nearly over and that I still had some fuel in the tank and I had a good push around the finishing circuit back at Mallory Park. In fact I snuck through the gates and did a second finishing circuit because I saw Dave coming on to the raceway as I neared the end. The track might look flat but there is a testing hill on the approach to the hairpin turn and you know that, at some point on the lap, you’re going to get a headwind too; so it’s never easy around there.

Anyway, with a final roll around the car park to bump the Garmin up to 50 miles it was with great satisfaction that I got off the bike and restarted my love affair with everything cycling related!.

If you’re interested, here is my Strava file of the day.

I’ll be back for the long route next year or maybe sooner if the newly formed venture of Cycling Mallory has anything else up its sleeve for us!

When I got home this evening, I had a choice to make.  Sit down eat the sweet ‘n’ sour pork stir fry that Mrs G had made and play with two tired kids, or dash about the house trying to find my kit (that was still strewn all over the place after the weekends triathlon) and make a quick 15 minute turn around to go and meet on our cross roads for a ride.  Sometimes I make good choices.  Tonight I made a bad choice and got the bike out.

Turning up late never goes down well and my 15 minute turn around had actually taken more like 25.  A group of lads had already gone on ahead and just two of us remained.  It didn’t take long for us to catch everyone up with the wind behind us, and we arrived at Mallory Park in good time.  After a quick chat and paying our £2 we set off on the lap to find an annoying head wind all the way down the start and finish straight.  By the time we hit the hairpin for the first time it was raining and after just one flying lap I was soaked through and put my rain coat on 5 minutes too late for it to keep me warm or dry.  Then, after a busy day at work forgetting to drink, I got cramp in my calf.

Only a couple of laps later and the lure of a hot shower and my sweet ‘n’ sour pork won.  My mate Dickie and I moaned all the way home and trundled along at an uncharacteristically slow

pace.  My eyes were stinging because the rain was washing all the crap (it’s not crap, it’s Dax) out of my hair and in to my eyes, my feet were cold and I couldn’t see out of my glasses.  I couldn’t even put my specs on my  helmet in a way that looked cool.  They were lopsided.  And the end of the arm hurt my head.  My nose was running and I was nearly drowning in snot.

There were no consolation prizes today.  It was windy, wet, cold and slow.  I’ve enjoyed my hot shower and my sweet ‘n’ sour pork.  And now I am enjoying a glass of red wine whilst ranting on here.  There were plenty of people still at Mallory Park when we left and we passed a few more cyclists on the way home.  Let’s face it, they must be more dedicated than me and I must be a fair weather cyclist.

This is Mallory Park

Last week we heard that Mallory Park, the race circuit near where I live, opened its gates to cyclists on a Wednesday night so we went down to take a look tonight.

From 6pm half of the circuit is open to everyone while the other half is used for teaching/training kids.  By 7 the whole circuit is open for you to pelt around as fast as you can.  It’s about 1.3 miles around the lap, the record is 2:35ish and I got nowhere near that!

On the face of things, riding around a lap for an hour doesn’t sound that appealing, but adding in the mixture of a fantastic road surface, no cars, a reasonable amount of undulation and a few mates to pit yourself against and it soon turns in to your very own race circuit.  As I write this post, my legs are gently aching so I know I’ve had a good work out.

What fascinated me was the activities going on in the pit lane. A number of adults were coaching kids on bikes ranging from little ones with stabilisers through to pre-teen sized road bikes.  It looked like a straightforward bike handling set up using cones and plenty of supervision and I think it is coordinated by the Leicester Forest East Cycling Club.  Probably worth a look for a cycling family?