After ending 2014 with no motivation, targets or incentives, 2015 has begun in a spritely fashion!

On returning from my epic Pyrenees ride I did virtually no activity for 3 months. Ok, so I did start running again but a calf strain scuppered that in October and wrote off pretty much everything throughout November apart from a 50 mile sportive. Then of course it was Christmas which bought the annual binge drinking and dietary meltdown.

In the two weeks running up to Christmas, my work clothes had become uncomfortable and I began to look forward to January with a never-before-experienced sense of anticipation. In fact it was this trouser shrinkage issue that motivated me to get on the turbo trainer a few times before Christmas and then again a couple of times over the break.

I faced a harsh reality when heading out with the lads after New Year and realised the gulf in capability that had emerged between me (idle, unfit and fat) and them (keen, trained and fit). I was left behind on the very first hill and became the weakest link after just a few miles. For the first time in a while I was the one that people had to slow down for after a climb. And I didn’t like that.

So I’ve led the charge with the lads to set some goals for the year.

The Fred Whitton Challenge is probably the biggest thing we’ll do this year. It’s labelled as “the UK’s toughest sportive” at over 110 miles long with the infamous 30% Hardknott Pass cropping up at 94 miles so the motivation to get on my bike is screaming out at me! Of course there is also the annual Skeggy ride the following week and I’m also in the Tour of Cambridgeshire. So there is plenty to shoot for.

I’m also looking at monthly Strava challenges, some more local sportives and maybe another challenge after the summer. Oh, hang on, did I mention summer? That reminds me of a well located campsite I’ll be staying at for 2 weeks in August that is surprisingly close to some famous Alpine climbs (Madelaine, Telegraphe, Galibier, Croix de Fer and Alpe d’Huez).

For now it’s time to enjoy the winter: get out on the bike when the weather allows, get used to training on the turbo in the garage, and embrace the mud for some off-road running.

Check out how smug I was in my last post where I was bragging about how I’d done so well losing weight since the turn of the year!  Well, I learnt a good lesson about dieting and training on Saturday morning.

I was delighted to get out on the bikes with my mate Stu who I cycled to France with.  He’s had a number of injuries over the last 12 months but seems to be on the mend so I hope he’ll be out with us more often this year.  We had a good chat and some banter around the first 27 miles of our route, then Stuey sensed the end was in sight and picked the pace up a little.

In normal circumstances I find the last 8 mile run-in on this route a good blast. It’s largely downhill from a beautiful village called Bitteswell, along quiet country lanes in the Leicestershire countryside.  Anyway, on Saturday I wasn’t so keen.

As soon as I had to start working harder, I found there was nothing in the tank. My quads felt heavy and ached to the point of exhaustion as I tailed behind Stu who was holding a 19-20 mph pace.  As soon as we hit the solitary incline on the run home I dropped way back despite pushing as much as I could.  The rest of the way home was just a case of keeping the wheels spinning and reserving some strength for Sundays 12 mile run.

Now, I do suffer from bad days from time to time and I am conscious that form and fitness only come along with hard work and dedication.  But this felt like something different and it didn’t take much analysis to work out what was going on.

I think I bonked.

Bonking is a “technical” cycling term relating to the point when you’ve got no energy left to draw on in your body.  Chris Froome was in danger of doing it in last years Tour de France and suffered a 20 second penalty when he got a late energy gel from the ever-loyal Richie Porte.  I’m not saying that the situation coming in to Sapcote was anything like the one Team Sky endured on l’Alpe d’Huez, but I do think I bonked! 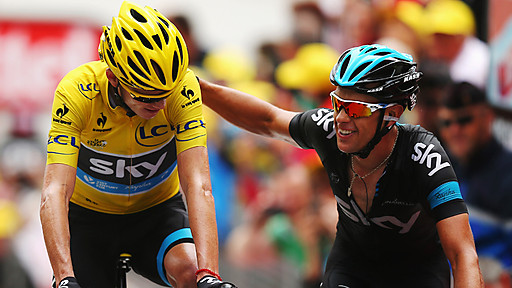 Looking at what I ate on Friday helps explain.  With a total intake of around 1500 calories I hadn’t fuelled up for the ride which burnt 1200 calories in itself.  The tank was well and truly empty!

On rides of that distance I don’t bother with snacks but could’ve murdered a banana just to get some strength back.  As soon as I got home I started steadily carb loading with some macaroni cheese for lunch and a pasta dish for dinner.  I think I just about got enough in to cope with the 12 mile run on Sunday, but won’t be risking the same situation happening again.

So, lesson learned: In place of my daily tuna salad I’ll be having a pasta salad on Fridays from now on, with a proper carb balanced dinner in the evening. That’s about the best I think I can do to prevent any unwanted bonking in the future but I’m open to other suggestions?…

Just a short update on how the New Year has faired so far.

Each week I’ll be (trying) to do a weigh in to gauge my progress to running the Brighton Marathon a good few pounds lighter than at the turn of the year.

I know that these things seem easier when you’re just in “in the zone” so I’m hopping that blogging about it will keep me in that zone for as long as possible.

Anyway, we’re one week in to the New Year – how is everyone getting along with their plan and resolutions?  From my perspective it was about getting back to fitness, more clean living and dropping a few pounds.  Here’s what I have changed:

I’m pleased with progress on everything other than fitness – but that’ll come back with time.  I’ve already lost 5lb’s in weight and that is just the motivation I need to get out for a run later!  I hope it’s going well for you too?

Has anybody else got that perennial feeling of dismay after stepping on the scales or going for a ride and realising they’re back to the same stage they were this time last year?  After training with focus and determination during October and November the festive month of December has completely scuppered me!

The pinnacle of my autumnal training came at the start of December with a 14 mile run.  It was the most substantial distance of my early marathon training and a real confidence booster for the strains and stresses that lie ahead.  But that was it.  During the following week I contracted the man-flu that is doing the rounds (I was lucky but I know lots of other people using antibiotics to fight off the virus) and lost 10 days of training before heading out for my pre-Christmas half marathon (which was a big disappointment anyway) 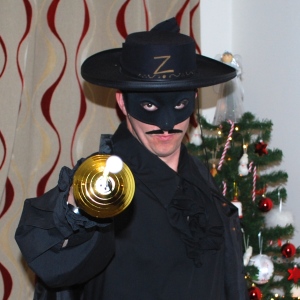 Even on the run-up to the event I was fully in to Christmas party mode:  For two weeks I had drinks on Tuesdays, recovery Wednesdays, party on Thursdays, recovery on Friday, out on Saturday night…. you get the picture.  When the festivities were finally upon us, I was already feeling the bulge growing around my belly and my belt appeared to have shrunk again!  During this time the exercise all but dried up.  Even the Boxing Day bike ride that I arranged (from our local pub) didn’t help because my hangover started after about 10 miles!  Other than that, one short bike ride on a Saturday morning and plenty of postponed runs are not enough to maintain fitness whilst loading the body up with lager, wine, gin and mince pies!

So here I am again at the start of January, having enjoyed a brilliant months of partying, nursing the tail-end of my New Years Eve hangover and rueing the loss of that fitness I had just a month ago.

Yet I still feel hopeful of what the sporting year ahead may bring.  I’ll be repeating last years alcohol free January which helped me shed about half a stone and my marathon training schedule will

kick back in properly next week (with plans for a couple of runs/rides in the next few days).  As of today, I’ll resume using the app that helped me get on top of my food intake 18 months ago (that I’d highly recommend) and start avoiding the “3 C’s” of crisps, chocolate and cheese.  The tuna salad is already in my lunchbox along with some Greek yoghurt and fruit and I’ll be actively ignoring the treats lying in wait within the kids’ Christmas selection boxes!

So I think I’m in a good position – well informed and motivated for the marathon – and should be OK to drop the first few kilos that will get the ball rolling and enable me to see the rewards of my dietary discipline!

Is anyone else in the same boat as me and if so, what’s the plan?