It was a welcome respite from those long, long Sunday runs this week as my training plan suggested a fast 10k run (or race) was the best way to spend Sunday morning.  Coincidentally, it was the same weekend that we’d booked to go away to a cottage in the Cotswolds so it all fell together quite nicely. 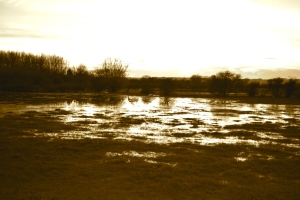 One of many flooded fields in Oxfordshire

I love running somewhere new and this weekend was no exception.  We were staying just outside of the small village of Kingham which was far enough north to have escaped the worst of the flooding, but still wet enough to change the landscape for a few days.

My route around Kingham, Churchill and back looked straightforward when I planned it and the first two kilometres were great.  The sun was shining for the first time in weeks and, whilst it was cool and crisp, the calmness of the air made it the most enjoyable running conditions so for this year!

I intentionally set out at a fast tempo avoiding any frosty patches that the sun hadn’t yet warmed and covered the first few kilometres through the village in good time.  The road kicked up a couple of times so inevitably my pace slowed a little but things got even more troublesome in the final kilometre or so when I realised I must have taken a wrong turn and began running on an unfamiliar road clearly in the wrong direction! 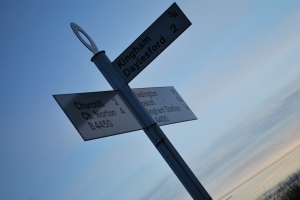 I should have paid more attention to this

Being dedicated to running as fast a 10k as possible I just ignored the fact that I was lost and kept going until Runkeeper announced I’d done the distance I set out to do (albeit finishing a couple of miles south of where I’d intended!!!).  Taking stock of where I’d ended up, I made the embarrassing S.O.S. call to Mrs G and heard my eldest daughter in the background saying “Is Daddy lost again!!”

When my wife arrived to my rescue I tried to deflect from the daftness of getting lost by gloating that I’d averaged under 7 minute miles for the 10k but it was to no avail.  So when I was taking a post-run hot-tub back at the cottage I just had to soak up the stick I was taking from them all.  Like I said – I love running in new places but really should pay a bit of attention to where I’m going!

But I still averaged 6.59 minute miles and that’ll keep me buzzing until next weekends 19 miler!

Dad and Me doing stuff at an early Standalone 10K race

Each year I run the Standalone 10k race that my Dad used to organise.  I started running it when my sister had the idea that I run the 20th anniversary race (cheers Sis).  In hindsight taking part in that event, and being honoured by the North Herts Road Runners with handing out the winners prizes, has spurred me on to all of the sporting challenges I have completed since.

I think that first race took me about 53 minutes. The following year I entered my first three half marathons, eventually smashing the 2 hour barrier in the inaugural Birmingham Half. A few months later I was full of emotion whilst standing on the start line of the London Marathon and facing the biggest physical challenge of my life. So I owe a lot to my sisters idea and to the Standalone 10k.

This years race takes place on 6 October and is probably full with 1200 entries by now. My brother-in-law has been training hard to compete in his first ever road race after a knee injury prevented him from taking part last year.  My best friend from my school years is “competing to complete” after his training plan stalled in July but it’ll be great to see him there. It was a special occasion when my wifes brother ran with me, and every year my good friends Jim & Leanne have been there with us, running when they’ve been able to and this year will be no different.

My initial reason for writing this blog is because each of us has been on a different training journey to get fit for it.  So I thought a bit of a best practice review would be interesting because I’m not sure if my cycling led approach is worth recommending or if Matts stamina training might be a better idea.  However, after a very quick Google search, it appears that we are all doing just fine according to one plan or another.   For those of us who need to get fit quick, there are even 2 week training plans around …. I like that idea.  My only bit of advice (to myself a much as anyone else) is to take it steady and run at a sensible pace for the first 5k.  You can speed up if you feel good but, if your lungs and legs are dead after 7k, it’s a seriously unpleasant last 2 miles!

It doesn’t matter that none of us have followed proper training plans.  It means the world to me that my friends and family take part with me and that we continue to celebrate the race that my Dad built. Thankyou.

Elvaston Castle hosted my first 10k of the year today and it proved to be a good reminder about form, fitness and attitude.

At the end of last year, I ran a PB for 10k and followed it up with a PB for a half marathon the next week.  And that made me a bit arrogant going in to today’s Sinfin Classic 10k thinking another PB was on the cards…. it wasn’t.

Today’s race was warm, but not hot enough to use as a full on excuse for running poorly.  The reasons for my poor run were:

The event itself was pretty good for a small local race.  Organised by the Derby based Sinfin Running Club, the setting is spectacular and a great place to hang around and enjoy a picnic with family and friends.  The terrain is very flat with a mix of cinder path, pavement and well trodden lanes through woodland.  Oh, and a rather unwelcome short section of cobbles and pebbles through the centre of the grounds that gave the old legs a good wobble!

The start was a little walk from the car park and registration desk, so that probably accounted for the 5-10 minute delay in getting underway.  Once we did get going, there were plenty off twists and turns before we left the grounds of Elvaston Castle and after a short paved stretch ran along the side of a river for 2-3k.  This was where I started to come undone and the sun warmed everyone up because there was no shade. After a little straight/hairpin/straight back on the road we headed back to the grounds of the country park and the final few kilometers of mixed terrain.

There were no big banners or chip timing for the start or the finish and I heard the officials say 44:56 as I crossed the line (my watch said 45:01 so I might take the official time instead!).  It’s a minute and a half over last years PB and I’m annoyed that I am so far adrift so will be taking the training seriously for the rest of the month to make sure that the half marathon I’ve got on 30 June is not as disappointing.