Elvaston Castle hosted my first 10k of the year today and it proved to be a good reminder about form, fitness and attitude.

At the end of last year, I ran a PB for 10k and followed it up with a PB for a half marathon the next week.  And that made me a bit arrogant going in to today’s Sinfin Classic 10k thinking another PB was on the cards…. it wasn’t.

Today’s race was warm, but not hot enough to use as a full on excuse for running poorly.  The reasons for my poor run were:

The event itself was pretty good for a small local race.  Organised by the Derby based Sinfin Running Club, the setting is spectacular and a great place to hang around and enjoy a picnic with family and friends.  The terrain is very flat with a mix of cinder path, pavement and well trodden lanes through woodland.  Oh, and a rather unwelcome short section of cobbles and pebbles through the centre of the grounds that gave the old legs a good wobble! 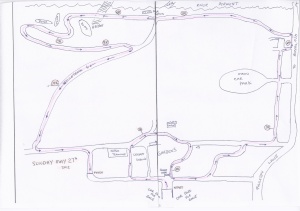 The start was a little walk from the car park and registration desk, so that probably accounted for the 5-10 minute delay in getting underway.  Once we did get going, there were plenty off twists and turns before we left the grounds of Elvaston Castle and after a short paved stretch ran along the side of a river for 2-3k.  This was where I started to come undone and the sun warmed everyone up because there was no shade. After a little straight/hairpin/straight back on the road we headed back to the grounds of the country park and the final few kilometers of mixed terrain.

There were no big banners or chip timing for the start or the finish and I heard the officials say 44:56 as I crossed the line (my watch said 45:01 so I might take the official time instead!).  It’s a minute and a half over last years PB and I’m annoyed that I am so far adrift so will be taking the training seriously for the rest of the month to make sure that the half marathon I’ve got on 30 June is not as disappointing.